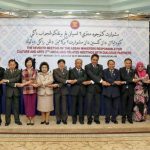 1. The ASEAN Ministers Responsible for Culture and Arts (AMCA) Meetings with Dialogue Partners, including the ASEAN Plus Three (AMCA+3), China, Japan and the Republic of Korea were held in Bandar Seri Begawan, Brunei Darussalam, on 25 August 2016. The Meetings were held in conjunction with the Seventh AMCA Meeting, and was preceded by the […]