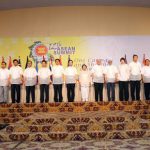 The ASEAN Plus Three (APT) Summit chaired by President Gloria Macapagal Arroyo, President of the Republic of the Philippines, was held successfully on 14 January 2007 in Cebu, Philippines. The Heads of State/Government of ASEAN Member Countries had a productive meeting with the Heads of State/Government of the People’s Republic of China, Japan and the […]