1. We, the Finance Ministers of ASEAN, China, Japan and Korea (ASEAN+3), convened our twelfth meeting in Bali, Indonesia, under the co-chairmanship of H.E. Korn Chatikavanij, Minister of Finance of Thailand and H.E. Jeung-hyun Yoon, Minister of Strategy and Finance of the Republic of Korea. The President of the Asian Development Bank and the Secretary General of ASEAN were also present at our meeting.

2. We exchanged views on regional economic and financial development and policies. We also reviewed the progress of regional financial cooperation initiatives, including the Chiang Mai Initiative Multilateralisation (CMIM), the Asian Bond Markets Initiative (ABMI) and the ASEAN+3 Research Group. Furthermore, we explored ways to further enhance these initiatives for higher efficiency and more positive impact.

3. In particular, we are pleased to announce that we have reached agreement on all main components of the CMIM, and decided to implement the scheme before the end of this year.

Recent Economic and Financial Development in the Region

4. We noted that the Asian economies, which have registered solid growth since the 1997 financial crisis, have faced significant challenges arising from the sharp contraction of the global economy. The deepening global economic downturn, coupled with heightened risk aversion in financial markets, adversely impacted trade and investment in the region. We also noted challenges posed by the downside risk factors, including further financial stress and emerging protectionism. Therefore, the current global situation requires more concerted efforts to enhance confidence, maintain financial stability, and prevent further decline in economic growth. In addition, the spread of the new health threat of influenza A (H1N1) requires us to stay vigilant on the possible impact.

5. We welcomed the outcomes of the London Summit on 2nd April 2009, which intends to restore growth and jobs, to strengthen financial supervision and regulation, to strengthen our global financial institutions, to resist protectionism and promote global trade and investment, and ensure a sound and sustainable recovery for all. We stressed the importance of the roles played by Multilateral Development Banks (MDB) in restoring growth through supporting the areas of infrastructure and trade balance and addressing development agenda. We reiterated our call for prompt implementation of the Fifth General Capital Increase of the Asian Development Bank (ADB) and expected the augmented ADB capital base be appropriately utilized to fulfill its role in Asia, especially during this global economic slowdown.

6. We also welcomed the proactive policy measures including economic stimulus undertaken by each member country in the concerted efforts to sustain financial stability and restore economic growth and development. In addition, we recognized the importance of conducting economic policies cooperatively and responsibly to ensure sustainable economic recovery of our region given the current volatile global economic situation. We agreed to strengthen the financial system of each country and promote the flow of capital in our region. Furthermore, we agreed to further strengthen our regional financial cooperation in order to ensure financial stability and foster market confidence in our region.

7. On the Chiang Mai Initiative (CMI), we have reached agreement on all the main components of the CMIM, including the individual country’s contribution, borrowing accessibility, and the surveillance mechanism. The agreed components of the CMIM, which is a framework of mutual assistance among ASEAN+3 countries, are consistent with its two core objectives: (i) to address short-term liquidity difficulties in the region and (ii) to supplement the existing international financial arrangements.

8. We agreed to implement the CMIM before the end of this year. In this regard, we tasked our Deputies to work out the operation details and implementation plan, particularly the legal documents that will govern the CMIM.

9. We agreed that an independent surveillance unit will be established as soon as possible to monitor and analyze regional economies and support CMIM decision-making. As a start, we agreed to establish an advisory panel of experts to work closely with the ADB and the ASEAN Secretariat to enhance the current surveillance mechanism in order to lay the surveillance groundwork for the CMIM. In addition, we welcomed Hong Kong, China, to participate in the CMIM.

10. On the Asian Bond Markets Initiative (ABMI), we stressed the importance of the ABMI in promoting the local currency bond markets. We agreed to enhance the ABMI Roadmap taking into account the outcome of the London Summit.

11. We endorsed the establishment of the Credit Guarantee and Investment Mechanism (CGIM) as a trust fund of the ADB with an initial capital of US$500 million which could be increased once the demand is fully met. The objective of CGIM is to support the issuance of local currency-denominated corporate bond in our region. This initiative would contribute developing regional bond markets. Issues regarding the establishment of CGIM such as business scope, leverage ratio and country limit are to be further discussed at the working level in order to make the mechanism to be effective by 2010 AFMM+3.

12. In addition, we agreed on the proposed provision of the Technical Assistance from ADB with regard to the pilot project on cross-border infrastructure bond issuance by the Lao government in Thailand. We also agreed to explore the possible measures to enable mutual access to securities market in the region. We took note of the active efforts and progress made in discussions by the Group of Experts composed of private sector participants, especially on cross-border bond transactions and settlement issues.

13. On the ASEAN+3 Research Group, we acknowledged the usefulness of the various studies conducted by the Research Group on financial market development in the region. We endorsed two topics for the 2009/2010 Research Group activities as follows: (1) Ways to Promote Trade Settlement Denominated in Local Currencies in East Asia, and (2) Regulation and Supervision for Sound Liquidity Risk Management for Banks.

14. We expressed our appreciation to the government of Thailand and Republic of Korea for their excellent arrangements as co-chairs of the ASEAN+3 Finance Ministers’ Process in 2009. We also thanked the government of Indonesia for its hospitality and kind cooperation.

15. We agreed to meet in Tashkent, Uzbekistan in 2010. China and Vietnam will be the co-chairs of the ASEAN+3 Finance Ministers’ Process in 2010. 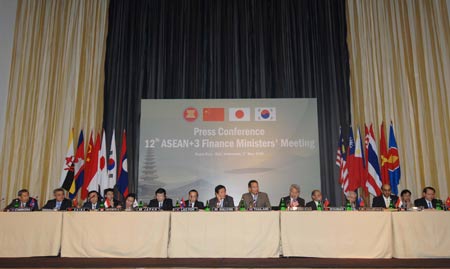